Water supply is a major concern for the desert town of Cabo San Lucas. Because of this, we just had a larger cistern installed to help us have more supply on hand, just in case. During construction a delivery truck damaged part of my neighbor’s driveway. I panicked. I thought our neighbor would be angry. I didn’t want to start off on the wrong foot in our new community. 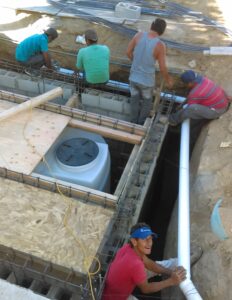 I learned three things from this incident.

Life is messy. Life is far from perfect. Even with the best intentions, bad or annoying stuff can happen. Accept it. So much of our stress comes from expecting perfection when, in reality, life is unpredictable and everchanging. Stuff breaks. Stuff disappears. Stuff is not where and when we need it. Don’t focus on who to blame. Don’t think it means anything about your worth. It doesn’t mean anything about us or anyone else. It just is. As you release unrealistic expectations for unchanging perfection and the desire to find someone to blame, you can decrease the stress you experience.

Not spazzing is first about not reacting poorly to stuff happening which does not meet our expectations, and secondly about not being upset before we know what stuff has happened.  I wasn’t quite up to spaz level, but my assumptions about my neighbor having a negative response were not pleasant. When we spaz, we are letting our fears create negative emotions. When we react from fear, we are not clear and in control. We are letting our negative emotions lead which often makes things unpleasant for ourselves and others. Take a breath. Don’t assume. Don’t fear. Uncover the truth.

If you are responsible for causing another pain or discomfort, own it. Apologize. Do what you can to make it right. We all make mistakes, and that’s ok. Take responsibility for your actions and do your best to make it right for all involved.

After the non-incident with my neighbor, the next challenge was overcoming my expectations for the completion of the project. Construction was not progressing as quickly as it originally had. The Type A in me started to show up. I mentally set deadlines I could not control, and I became stressed and upset when they were not met. Then I looked back at this blog post idea. Stuff happens. Materials were not available. Personal issues came up with the crew. I stopped spazzing and started joking with the crew about which mañana (tomorrow) the project would actually be finished by. It always amazes me the freedom and joy I experience when I move from the negative emotions of anger and disappointment, to embracing acceptance and playfulness. Finally, we all tried to make it right. The crew couldn’t meet the deadlines they set, but it was because they were doing quality work. By releasing my expectations, I made the project easier on them because I did not add tension to the situation.

As you move through this week, notice what you are triggered by. Can you accept that stuff happens, keep your fear-based negative reactions in check, and rationally look for ways to make it right?