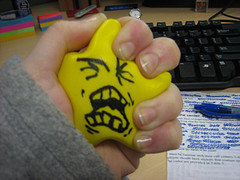 The concept of a Type A personality has not been around for long. It was actually identified in the 1950s by two cardiologists, Drs. Meyer Friedman and Ray Rosenman, who were studying coronary heart disease. They found a link between personality types and heart disease. According to their research, they identified three types of behaviors:

• Type A, which they labeled as competitive, ambitious, impatient, aggressive, and fast-talking;
• Type B, which is more relaxed and non-competitive, and
• Type C, which is hardworking, but becomes apathetic when faced with stress.

Those considered Type A were more prone to having high blood pressure, coronary heart disease, and stress-related illnesses.

According to the Friedman and Rosenman study, Type A’s are defined as:
• Involved in multiple stressful activities tied to deadlines.
• Showing a tendency to rush to finish activities.
• Practicing perfectionism.
• Taking everything too seriously.
• Having an intense sustained determination to achieve one’s personal goals.
• Competing constantly against others and themselves in all situations.
• Having a persistent desire for recognition and advancement.
• Exhibiting mental and physical alertness over a long period of time.
• Unable to easily and clearly express their feelings.

According to Dava Money of the Creative Healing Institute, 50 percent of the United States population is now considered a Type A personality. This is because the Type A personality is a learned, rather than an innate behavior. Our Western society rewards competition, success, a focus on work, and being constructive. Added to this, modern technology provides new ways and new reasons to multitask and always be connected. The result is the desire and belief one must be a superhuman handling everything thrown his or her way. Because of this, most of us, at one time or another, experience Type-A tendencies.

In this technologically fast-paced world, have you become a Type A personality?

Are you experiencing some of the negative tendencies and results of being a Type A person, like:
• Anxiety when you have to wait.
• Stress when your to-do list no longer calms you down, but becomes your tyrannical master.
• Being frantic, overwhelmed, and inexact due to a sense of heightened urgency.
• Being crazed due to clutter in the house or office.
• Feeling powerless to say no to responsibilities even when you become buried in them.
• Insomnia due to uncompleted to-do lists and unread email.
• Exhaustion from unrealistic multitasking.
• Devaluation as your focus on work means you are underpaid for the long hours you work and for what you deliver.
• Work-life imbalance keeps you away from the joy of family and friends, as well as our own needs and self-care.
• Martyrdom from an extreme desire to serve and give to others.
• Frustration by not being able to affect the emotions, actions, and results of others for which you feel responsible.