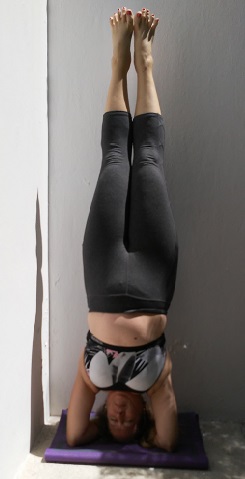 Before moving down to Mexico, I would occasionally go to a gentle yoga class or do a few poses suggested by the Wii video game. When I first moved to Cabo, I had a practice of my own, for about a day. Truly for the first two years in Mexico my practice was non-existent. Finally, just after Christmas 2017, I knew it was time to get back into yoga.

Let me tell you, the first month I started back up, I was surprised at how bad I had become at yoga. Ok, so there is supposedly no good or bad to yoga, so let’s say that I had very limited flexibility, balance, and strength. It was a struggle for me. And I was angry at myself for slacking and at my body for not cooperating. I was disappointed at my abilities and was really hard on myself.

The 8am classes I attended are challenging, and I often felt like a floundering walrus doing the moves instead of a graceful swan. Toward the end of this style of class, the focus is on backbends and inversions. I remember the first time I heard, “If headstand is in your practice, go into it now.” I can imagine the incredulous look that passed over my face.  Needless to say, headstands were not in my practice. When I looked around the room however, most of the class had their feet in the air before I realized what had been said. 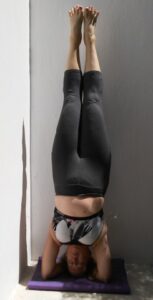 As the morning class was the one I attended, my nemesis – the headstand – was ever present. The first few classes, I didn’t even try. I hid in child’s pose or tried to blend into the corner. Eventually I realized that headstands were part of the usual routine and that I could not get away from them, so I started to do the beginner version, the rabbit. I felt stupid with my tush in the air and my head and knees on the ground looking less like a rabbit and more like a discarded wad of gum. But it was more progress than not trying at all.

And, as usual, when I am hard on myself, I push myself to get better. I continued going to classes. I participated in the 30 days of yoga challenge in March. Little by little my strength, flexibility, and balance started growing the more I practiced. I started to learn that yoga was more of a mental journey than a physical challenge. I learned that getting well sometimes means getting sicker first and that there is strength in letting go. I learned the importance of balance on and off the mat and how to let go of self-judgment.

As I started to see my physical ability improve, I gave myself a challenge. My goal was to be able to do a headstand by my 50th birthday. This gave me over a year to reach this goal. My yoga instructor laughed at me. “Headstands are easy. You won’t need that long.” I mocked her. Did she not see my age, strength, and physical inability? I thought this was a Herculean task and she saw it as easy as tying my shoes.  Little did I know at the time that the issue was more mental than physical. The instructor thought fear was holding me back, but it was actually due to disbelief in myself and a tendency to keep myself down (in this case, physically as well as mentally).

It took me from April until June to do my first, albeit assisted, headstand. It was ugly, but I did one. Afterward, I started to do them with more strength and poise. I was no longer flinging myself in the air, but I was controlling my movements as I got into and out of the pose. Yes, I had strengthened my neck and core over the months, but the real reason I was able to do the move is that I took advice from my friend Catherine Johns and spent time outside class visualizing doing it. I overcame my body by first overcoming the limiting beliefs of my mind. The achievement of doing the pose gave me a strength in my body and mind that I don’t think I have ever felt.

What do you think is impossible in your life right now? It is time to take baby-steps toward your challenge?